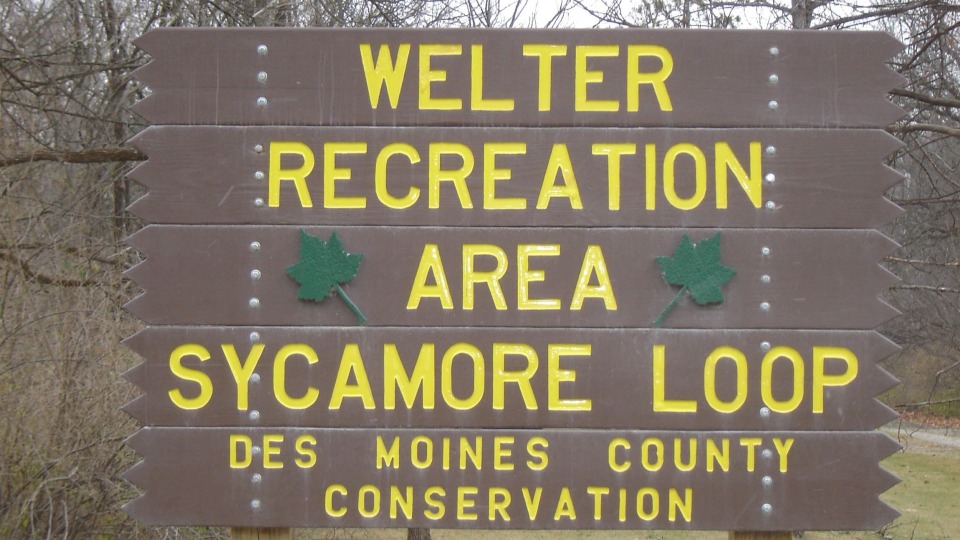 Located along the quiet banks of the Skunk River, Welter Recreation Area is Des Moines County Conservation's southernmost Recreation Area. It has been developed primarily as a camping destination and is popular among picnickers, RVers, tent campers, and boaters.

The campgrounds only take up a small portion of the overall area which consists of 63 acres spanning between Sycamore and Maple loop, and from Skunk River Road to the river. Above Augusta, Cottonwood Loop resides on additional 16 acre corridor between Skunk River Road and the river. Both sites are open to public hunting outside of the camping season.

Note: All campsites at this park are first-come, first-served. Campsites may not be reserved in advance.

Augusta is situated in a small pocket in the hills along the Skunk River. The first of the European settlers in the area was John Whittaker who located at Flint Hills (Burlington) in 1832, but he and other settlers were driven back across the Mississippi River by Indians. With the Black Hawk Purchase, settlers could legally return to the Iowa side and Whittaker staked a claim near the site of Augusta where he built a log cabin. He later built a stone house, parts of which can still be seen. He also selected a site for a dam on the Skunk River, but sold it in 1835. Levi Moffitt then built a mill-one of the first in Iowa. Part of the rock dam for the mill can still be seen at the site when the river is low. One of the stone burrs from Moffitt's Mill has been used as a base for the fountain in the Shakespeare Garden in Crapo Park. At one time, Augusta was expected to become an important town, but plans for a railroad did not materialize and the town gradually declined.

After this area was taken over by the DMCCB, intensive tree and shrub planting occurred. Facilities were constructed to enhance the use of the areas.

Cottonwood Loop is the farthest upstream (west) loop of Welter Recreation Area. It is a day-use/river access area and offers a picnic shelter, outhouse, and a gravel boat ramp that provides boat access to the Skunk River.

Cottonwood Loop can be found 1.1 miles west of Augusta on Skunk River Road.

Maple Loop lies on the eastern edge of the town of Augusta. Due to department budget cuts, Maple Loop was permenantly closed at the end of 2021.

Sycamore Loop is the area's most developed loop and features 18 campsites, of which 12 offer electric hookups. Other amenities at Sycamore Loop include a central water supply, a central RV dump station, a shelter house, two outhouses, and a sand volleyball court. Sycamore loop is the easternmost loop (the farthest downstream) of Welter Recreation Area.

Note: All campsites at this park are first-come, first-served. Campsites may not be reserved in advance.